Here at the Swift Agency, one guy that knows that Taylor’s lucky number is 13 (insert sarcasm here), we know we put up a clip from Live from Regis and Kelly with a picture from Good Morning America. So now it seems fitting that we do the opposite.

Here’s Taylor promoting her Wonderstruck perfume with an appearance on GMA: 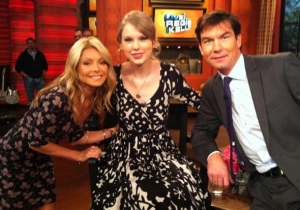 (Source: Live with Regis and Kelly)

Coming up in the Calendar!