I see how this is gon’ go, Taylor Nation.

Or rather I don’t. Are we just going to get stadiums in this tour? Exhibit A: 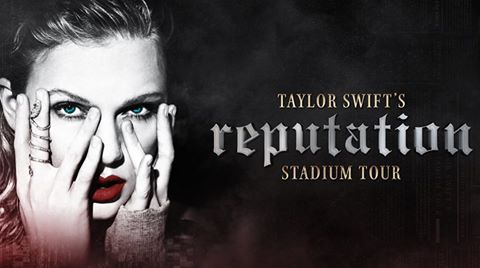 Looks like it. Even on Ticketmaster, the name of the tour includes the word “stadium” and that is a bit concerning to me… If the Queen of Your Heart is willing, I’m hoping for a first round of full stadium concerts and later on smaller venues, just like the previous tours.

But T. S. has already broken old patterns. This is the first album in which there are no secret messages. All bets are off.

She might just go for stadiums only this time. One thing that I feel inclined to remind you about is that Taylor Swift is also a very savvy business woman. In past tours, the stadiums have always gone out first. It’s taken a while to get the arenas and smaller venues right after.

Like I’ve been discussing with a lot of people, I will push for the idea of a second leg but odds are Taylor is not going to cover the same region again. The trucks rarely go back to the same area where they’ve already been (some exceptions stand, where she has had to cancel and reschedule, of course).

Myself, I can’t pile on costs and travel to another city. So when I say that I’m willing to risk it and wait, I really mean that I can’t really afford it unless she’s playing a local venue. The decision is really taken for me.

A lot of people grew up with Taylor. They’re now pursuing higher education, have gotten married, have a kid, lease a car, have a mortgage or whatever. Simply put, life happened. Things can’t happen at the drop of a hat. There’s a lot of things to balance and… Sorry, “Mine”, you’re literally the only song that says this accurately so I have to use you again: We got bills to pay. Sacrifices and compromises have to be made, but we’ll manage something. We hope.

Taylor Swift is not only the person and the artist. The name also represents a very lucrative business and a big machine (pun intented) of sorts. It’s an entertainment company as well. As such, it also seeks financial gain to keep running and maintain its people. That includes not only T-Swizzle herself but her management, PR, agents, representatives and various employees. A tour also requires a lot more people seasonally hired like The Agency.

Note: The Agency is Taylor’s touring band. She often uses them for other engagements but contrary to what you might think, they are not the ones that play in the studio albums (although they have in a few). Some of the fans (including yours truly) have been lucky to meet them over the years. As Taylor’s fame has grown, meeting them also happens less often. Now back to your regularly scheduled rant.

Let me state this: When you go to see Taylor in concert, you are on your free time. She’s at work. She will have more fun if you’re having fun, so she makes sure you will be entertained. It’s still an investment that must have a high ratio of revenue. For that reason, you must also be wise and not necessarily go for complete broke. For you, it must be enjoyable without breaking the bank.

So, smaller venues…? We can only hope. But don’t expect her to cover as much international locales as she did in previous tours. I don’t dare to hope she will consider visiting new countries this tour (a visit to South America would be nice, but seems to never be in the cards).

Ok, rant over. Best of luck to everyone hoping to grab some tickets in your neighborhood.

Remember all this information is subject to change, so keep checking TaylorSwift.com and Ticketmaster.