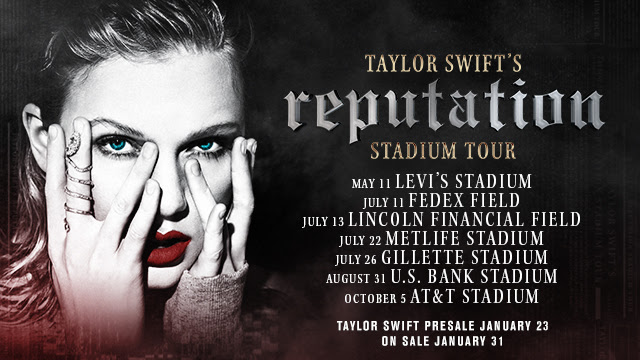 Here at the Swift Agency, just a guy who’s been known to obtain tickets at the last minute, we’re glad there’s a few more concert dates. I was just hoping more spots would open in Canada (we don’t all live in Toronto, believe or not) and perhaps a few other nations around the world. Tickets for the new dates will go on sale January 31st at 10am local time (local time of the venue, of course).

There will be a Taylor Swift Presale for fans. If you already have signed up for the Taylor Swift Tix (aka Ticketmaster Verified Fan), you are already in with higher priority. If you haven’t you’ll get a chance this Friday, January 5th when new registrations will open at 10am EST. The presale starts on January 23.

Now can we talk turkey? In case you haven’t realized, Taylor’s instant sold out concerts from previous tours had a unintentional assist. Scalpers and ticket resellers will grab as much as they could for resale. That means a lot of fans couldn’t get tickets and would try to grab them from resellers later. This means a sold-out concert wasn’t really packed until those tickets got resold.

The two new factors are the Ticketmaster Verified Fan system and the higher ticket prices. This has two consequences:

This has an unwanted side effect. It’s harder to sell out a full concert – much harder. Fans that must deal with the high prices (this time from the official sites instead of the reseller sites) will usually wait to see what other options they have or to come up with the money.

Will it work? I can’t really say, but both Taylor Swift’s reputation stadium tour and Ticketmaster are banking on it.

My take? I don’t like this strategy too much. Before, there was a chance to grab a ticket for much less with the previous system, although it was hectic to accomplish. To top it off, the reputation STADIUM Tour is only doing the large stadium venues and major cities. Smaller cities and towns will have fans that can’t reach both the higher prices AND budget travel expenses. The chances of opening up a leg for smaller venues are now close to nonexistent.

I also can’t say I have a better solution though. The bigger the venue, the most effective the tour concerts become. They are seen by a lot more people at once and more than likely production values will be much more impressive. I won’t deny that the price might be worth it, specially since this time the chunk taken by the scalper/reseller margin should be much less. A lot of fans might cave and take the plunge. Some might just have to rely on what online video leaks out.

Coming up next year! The 60th Annual Grammy Awards. Taylor Swift has two nominations. No, no, no, chill! Taylor’s reputation is not eligible yet. It will be eligible for 2019’s (wow that is a long time to wait). She is nominated for Best Song Written for Visual Media with Zayn for “I Don’t Want To Live Forever”. She also gets a nod for writing the Best Country Song for “Better Man” as performed by Little Big Town.

3 thoughts on “Tour Talk: New dates for reputation! A commentary on ticket sales.”