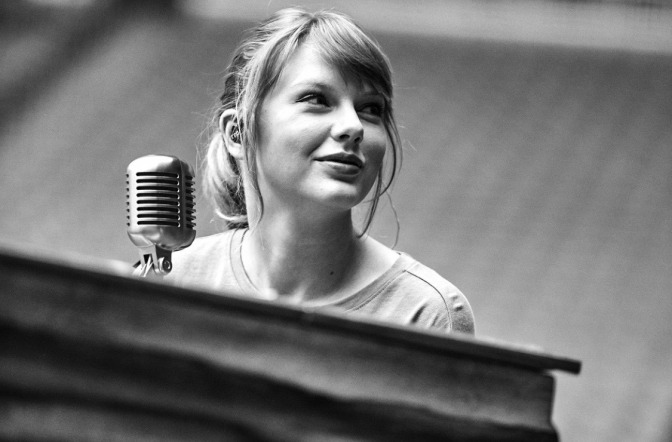 Thirteen years ago, Big Machine Records was just starting when it signed on a very young fifteen year old country singer named Taylor Swift. The Sparkly Dressed is now 28 years old and the contract between her and the little label that could is up this November. Taylor Swift will become what is known as a free agent.

This means she will be able to choose between signing up again with Big Machine, signing up with a new label or go at it alone. She could make history and not sign with anybody or create her own label. I’ve learn that second-guessing the Blonde With The Sparkly Guitar Which Must Be Back There Somewhere is an exercise in futility: she will often do what nobody expects.

Variety puts it in more business-oriented terms. The Enchantress could choose to do her own label work, or just pick a new label but choose whether to stay within the Universal Music Group umbrella. Although we can expect Scott Borchetta to make a huge offer to the Forever and Always Fearless One, so will everyone else. However, Scott has some huge aces up his sleeve: Big Machine holds the masters – the original recordings of all of Taylor’s back catalogs. Offering her ownership of those could get Taylor to sign with Big Machine again.

According to Billboard, Scott Borchetta was considering the idea of selling the label as recently as 2015. The label price offers could drop significantly if he relinquishes the masters of Taylor’s old music. Big Machine can stream Taylor’s music online but other possibilities require she signs on their usage because she’s the actual songwriter. She does retain some control but as all singer/songwriters, it’s a sure bet that Taylor would prefer to own the masters herself.

Both Variety and Billboard cite sources that say heavy negotiation has taken place but no deal has been struck yet. In the end, nobody knows until things become public. I’m dying to know, is it killing you like it’s killing me?

Coming up next in the Calendar: